All three gardens are from the 'Arts and Crafts' era (Late 1800s and early 1900s) which was one of the most influential, profound and far-reaching design movements of modern times beginning in Britain around 1880 and quickly spreading across America and Europe. 'Arts and Crafts' was a movement born of ideals and grew out of a concern for the effects of industrialisation: on design, on traditional skills and on the lives of ordinary people. Its aim was to revive traditional craftsmanship and restore simplicity and honesty to how buildings and furnishings were made. It also influenced garden design. In garden design the Arts and Crafts movement led to an emphasis on the importance of the partnership between architect and gardener (One of the most famous and notable partnerships - that of Edwin Lutyens and Gertrude Jekyll).

The aim was to include traditional craftsmanship in the detail of stonework and beyond the formal 'outside rooms' that were viewed from the house, the Arts & Crafts garden gave way to the landscape, with rock gardens leading to woodland glades, and wild areas with rustic paths and water gardens. 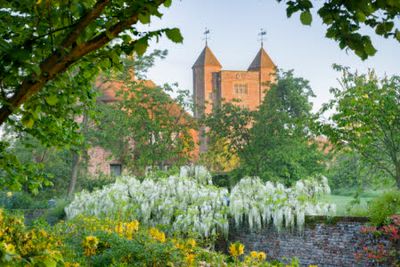 Vita Sackville West (poet and novelist) and her husband Harold Nicholson (diplomat and journalist) bought the property in 1930 - at the time a ruined Elizabethan manor house surrounded by vegetable gardens. Harold designed the lay out and provided the architectural framework for Vita's romantic planting. They divided the garden into separate enclosures dividing the plot into interconnecting gardens 'like the rooms of an enormous house' using strategically placed walls, hedging, paths and vistas. The idea of garden rooms is to draw visitors further into the garden "fuelled by curiosity and laden with expectation". Vita 'painted' the rooms with plants creating the now famous White Garden, Rose Garden, Orchard, Cottage Garden and Nuttery. Today the house and gardens are run by the National Trust but the house is still lived in part time by a grandson of Vita and Harold - Adam Nicholson and his wife Sarah Raven - a noted gardener, cook and TV presenter - who also own Perch Hill Farm nearby where Sarah has a well known Cutting Garden and offers courses in gardening/flower arranging and cooking.

Christopher Lloyd was born at Great Dixter in 1921 and sadly died in 2006. The architect Edwin Lutyens - one of the key players in the Arts and Crafts movement - had remodelled the old house and laid out the structure of the 2.5 hectare garden where Christopher and his mother Daisy created a garden. Christo Lloyd lived his whole life at Great Dixter experimenting with plants and colour combinations in his amazing garden. He was a charismatic and sometimes controversial gardener and documented his experiences at Great Dixter in books, magazines and newspaper columns. Great Dixter is a place of pilgrimage for many and is now a Charitable Trust and under the stewardship of Fergus Garrett who was (and is still) head gardener at Great Dixter under Christopher Lloyd and his good friend. Fergus is now CEO of the Trust and still works in the gardens himself. 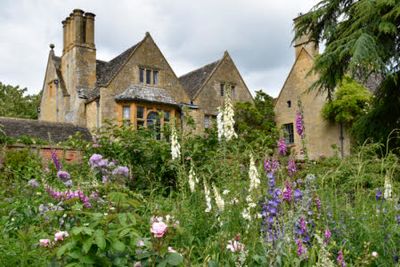 Lawrence Johnson was an American born, naturalized British in the early 1900's. A plant collector and an artistic man of vision he created two great gardens in contrasting location and style - Hidcote in the Cotswolds and Serre de la Madone in the South of France. Johnson's mother bought the small estate of Hidcote in 1907 and Lawrence went on to transform what was open windswept farmland into one of the most influential gardens in the world. Like Sissinghurst, Hidcote is laid out in strong formal lines creating garden rooms to provide structure and shelter. Vita Sackville West described his design as a 'series of cottage gardens' and loved his use of mixed hedging. Each of the spaces was themed and unique in design, scale, colour and atmosphere with names like the Bathing Pool Garden, the Fuschia Garden, the Pillar Garden and so on with each one contrasting sharply with the next. From a relaxed area of spinneys and ditches you step into another extraordinary space - the majestic vista of the Long Walk and its two parallel hedges. The whole garden is filled with theatrical and architectural statements and endless surprises. In 1947 Johnson entrusted Hidcote to the care of the National Trust who run it today. 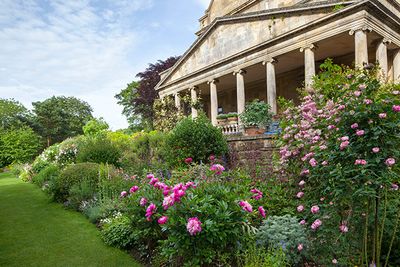 I'm adding one slightly lesser known and still privately owned garden to these three because it's located just a stones throw from Hidcote and is lived in and gardened by Anne Chambers and her husband Johnny. Anne's grandmother Heather Muir started the garden in the 1920's and was a friend of Johnson's. The two drew inspiration from each other in the creation of their respective gardens. Heather's garden at Kiftsgate Court was allowed to develop organically and has a much more feminine feel to it in contrast to the architectural lines used next door. Heather's daughter Diany took over the house and gardens and now with Anne Chambers we have the third generation of women to develop this wonderful garden. You may have heard of the magnificent rambling rose - Rosa filipes Kiftsgate. The original of this rose growing through a copper beech at Kiftsgate is said to be the biggest in Britain.